A manager at a fast food restaurant in Texas is looking for a new job after being fired for refusing to serve 2 police officers.

Officers Michael Magovern and Cameron Beckham stopped by Whataburger in Lewisville on Tuesday, September 15, and were turned away before they could even get up to the counter.

The cops thought it was a joke, but the manager didn't say another word. The 2 left and ate somewhere else.

I was basically in shock," said Beckham. "It's not every day that you go to a establishment thinking that you're gonna hear something like that." 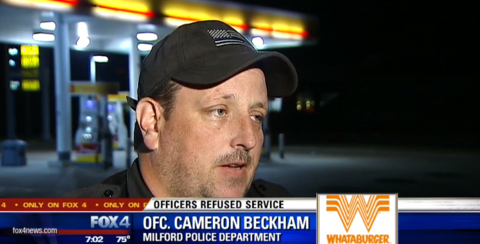 "We don't serve cops," the officers were told, according to Fox 4 News.