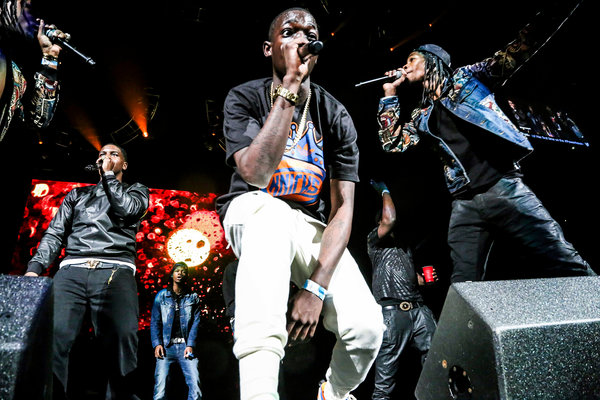 Reality Sets In For Bobby Shmurda

Still behind bars..Bobby’s mother is his most consistent visitor, who has come to see him twice a week since he was arrested in December. With a hefty string of gun and murder charges, the future for young Ackquille Pollard is uncertain.

“When I got locked up, I thought they were going to come for me,” Bobby says about Epic Records who signed him at the height of “Hot N*gga” hysteria. “But they never came.”

According to the NYTimes, Bobby Shmurda’s previous bail package was withdrawn.

At press time, Epic declined to give comments to the NYTimes. But Bobby’s defense lawyer Kenneth Montgomery called the GS-9 indictment “a glorified gun case at best.” He also shot down reports that the young rapper is a gang leader.

As described in his lyrics, Bobby’s father is currently serving a lifetime prison sentence for attempted murder. But his mother has been in his corner since his viral hit took over the Internet, and Sha Money XL, who signed Bobby to Epic has been to visit Shmurda on several occasions since his arrest.

Once another young kind braggin’ about his violent behavior and drug dealer dreams, Bobby has a different view on his rap career now. “I’m going to try my best to go back on the deal,” he says about his deal with Epic. “If not, I’ll give them their music and bounce.”

Now, from jail, Mr. Pollard, who once stood by the veracity of his rhymes, said that the lyrics were “fabricated,” because “that’s what’s selling nowadays.” And, he added, Epic “grabbed me up at a vulnerable time.” He continued: “I was desperate to get out of the ’hood. I knew I was going to lose my life or go to jail.”