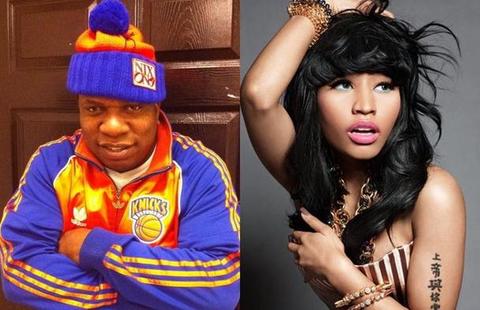 Big Fendi is talking again and his eyes is on that paper. [portions Dx]

According to Big Fendi, Nicki Minaj is still signed to his Dirty Money production company.

Big Fendi, the former manager of Nicki Minaj, spoke in-depth about discovering the rapper, their falling out, and more, during a recent interview with Power 105.1’s The Breakfast Club. Fendi kicked off his interview by informing those listening that he still owns the trademark to Nicki Minaj, NickiMinaj.com, and more.

He also added that he was only offered a finder’s fee of $15,000 for the work he put in with Minaj prior to her deal with Young Money.

“I didn’t get nothing,” Big Fendi said. “Nah, Nicki tried to offer me a finder’s fee of 15,000. I laughed at it. Can’t be serious…Actually, I own the trademark to Nicki Minaj. I own NickiMinaj.com. I actually [own her trade]. So, in a minute you gon’ see a lot of things coming off those shelves.”

According to Fendi, he met Nicki Minaj through MySpace in either 2006 or 2007. He says that he encouraged the Jamaica, Queens lyricist to change her rap name from Nicki Maraj to Nicki Minaj for marketing purposes. He added that changing her name was a move cosigned by both Jadakiss and Busta Rhymes... full story Here