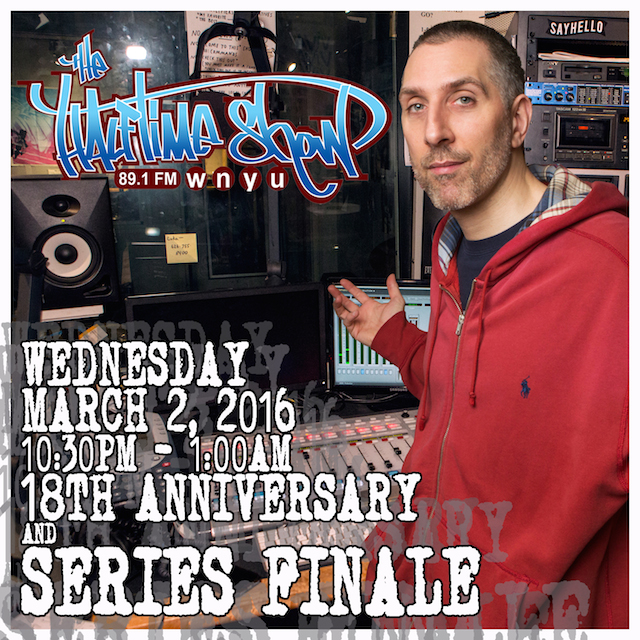 DJ Eclipse has announced that the legendary New York City radio show, The Halftime Show will end its nearly two decade run on March 2. This is truly a sad moment for authentic Hip Hop.. check out what Eclipse had to say below:

“It's been a great journey, but after 18 years I've decided to give The Halftime Show on 89.1FM an ending,” Eclipse announced via press release and Facebook. “March 2, 2016 will be the 18th anniversary of the show as well as the last show. We will have a big blowout show as we do every anniversary with a few producers, a ton of MCs and a DJ or two.”

The Halftime Show was founded in 1998 by DJ Eclipse, DJ Riz and Lynn Gonzalez. The show broadcasts on New York University’s WNYU and was delivered a gaggle of historic Hip Hop moments over its 18 year run.

“Thanks to all the artists that have come through over the years,” Eclipse added before continuing, “guest hosts and DJs that have held me down while I was on tour and to the folks up at WNYU who continued to provide us with an outlet to play good music even after our time should have run out.

“Special thanks to DJ Riz and Lynn Gonzalez who started the show with me 18 years ago and to all the staff that have contributed to the show throughout the years. Skizz, Petey Cologne, Marz One, Navani, Big Zoo, Soe, Naveen and anyone else that helped out in any way I thank you for your contributions and hope the listeners have enjoyed what we had to say/play.”..

Wane Enterprises Ceo Bruse Wane was on the Halftime show not to long ago.. check the picture below: The entire Wane Enterprise family would like to say thank you for the music Eclipse real Hip Hop forever !

Some portions of this story Via HipHopDX