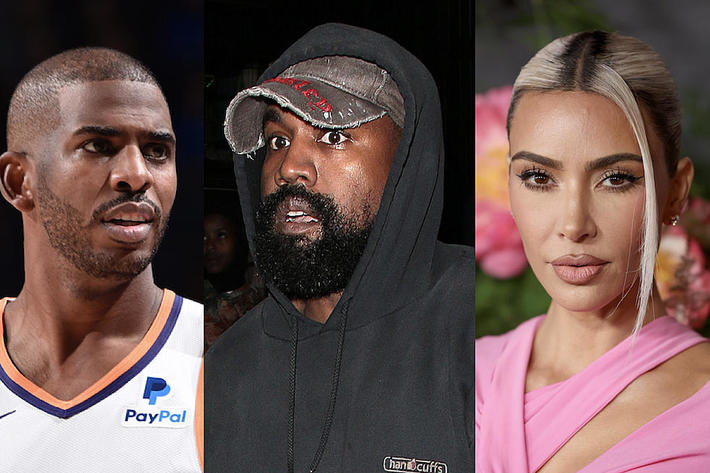 Kanye West is ending his time on Twitter by exposing his ex-wife Kim Kardashian and NBA player Chris Paul.

Tonight (Dec. 1), Kanye West ended what has been one of the most tumultuous of his career by dropping a bombshell: He claims he caught Phoenix Suns player Chris Paul with his now-ex-wife Kim Kardashian.

In a tweet sent following his tirade on Alex Jones' podcast where he voiced his approval of Hitler and Nazis, Ye wrote, "Let's break one last window before we get outa here. I caught this gut with Kim. Good night."

Neither Paul or Kardashian have responded to West's accusation. Ye's Twitter account, however, has since been suspended, due to him sharing an image that appeared to show a swastika within the Star of David.

Ye eventually posted screenshots of he and Elon Musk's personal text messages, which show Musk responding to the image, saying, "Sorry, but you have gone too far. This is not love."

"Who made you the judge." West replied to Musk.

He captioned the post, "Well everyone. We had a nice run. Jesus is King."

What did Kanye West Say About Hitler and Nazis?

This all came following Kanye's aforementioned tirade on Alex Jones' show Infowars, where he sympathized with Hitler and Nazis.